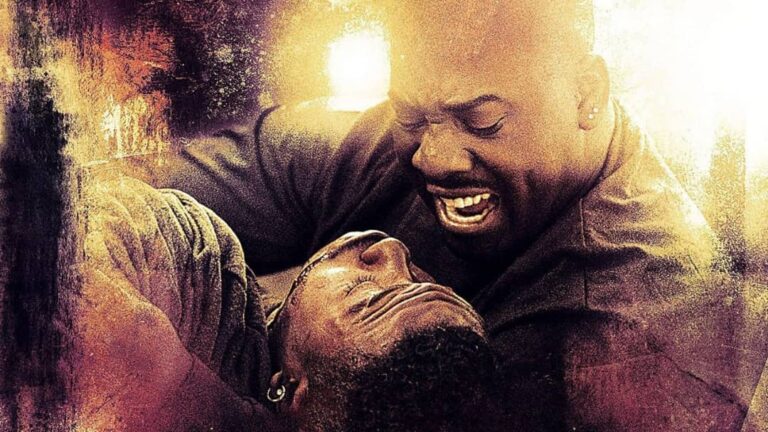 The Hughes Brothers created what is at its core the archetypal black youth story of the 70s through to the 90s (where most of the film’s action is situated) and unfortunately, even now. The violence is taught early. The violent are young. The parenting is outsourced to the streets. The opportunities are small. And the police are state-sanctioned goons out to bully or actively remove the black minority.

Watts, California is where all this happens. This piece of urban jungle hell is the culmination of a trans-generational rotting of the family and wider communal systems of Black and Coloured people in America in communities bankrolled by the racist politics of a racist majority.

Protagonist Caine (Tyrin Turner) seemingly named after a popular short form for Cocaine in the 90s, and his friends are essentially mirrors of the real-life Black youth forced to live a life with little by way of prospects and plenty by way of incentive to do crime. To kill, steal and be as menacing as possible to a racially broken society whose prosperity and humanity is so distant, we never see a scene outside the confines of the projects.

Menace II Society manages to capture the reality of this situation by forgoing any important subplots and letting us be guided by Caine and Caine’s perspective of his life in those projects and through the fateful summer. One can’t help but wonder how distracting it must have been for a viewer outside the strictures of that world to experience multiple lives and realities. That single-mindedness exposed the situation of the black child as “prey” coexisting, killing, wronging, helping and damaging other prey as Mr. Butler (Charles Dutton) succinctly puts it at the end of one of the monologues that is one of the film’s best points.

It seems a critique of anything must nod or sneer at the attempts or lack thereof by creators to humanize characters that veer away from the binary, but it is the nature of the work that its characters are more complex than the slightly reductive title might have prepared us for. The characters are human with as much humanity as you and I. The kids (and adults) are not good people. There is no attempt to paint them as such. The truly scary O-Dog (Larenz Tate) employs a gun at the slightest aggravation. Indeed, his gleeful murder of two unarmed and innocent Korean shop owners sets the stage for somewhat justified retribution later on. Neither are they all shorn of choices. Stacy (Ryan Williams) is an American Football player of some talent with offers to play in college in Kansas that he anticipates with a summer of debauchery and crime or Caine himself who having miraculously finished a high school diploma, decides to continue pushing drugs, stealing cars and car parts or robbing their owners blind in a summer that ends with him dead. Caine is particularly tragic not just because he genuinely had a chance to break the chain of death and incarceration that had entangled his parents and his mentor Pernell (Glenn Plummer), but because he also inadvertently caused the death of his inspiring foil Sharif (Vonte Sweet).

Lai Mohammed and the Paradox of Social Art

But they’re not bad people because all worthwhile human inquiries into life have acknowledged the futility of absolutist binary thinking, and the simple fact we see them do as humans do: we see them laugh and learn, help others and feel pain, loss and ecstasy as viscerally as anyone else in real life. You could see them as absolutely bad people but that would mean missing the message that morality is a curve that shifts shape depending on the lens of those who view it and the privilege of that number.

The biggest achievement of the film however is how it indicts the rest of us. I think of lonesome poverty-smitten Watts and towns like it strewn across Los Angles and California at wide: two of the most prosperous place in the U.S. and how much it resembles slums in Agege, Mushin, Oshodi, Somolu, Ojo, Ikorodu and countless others in Nigeria’s most prosperous state. I think of how alone in their monotonous machine world of pain, lack and anger they must be. Who really is the menace? Those that live in this reality created in large parts by everybody except themselves or those of us with a little or lot more luck who have the power to organize, push and maintain a push for systemic changes but refuse to do so? I doubt it’s either of those groups to blame. I doubt the Hughes Brothers had any culprits to give, and I refuse to apprehend any at this juncture, but we can all agree that a little introspection into privilege and the workings of our society’s systems is in order.

And this introspection has to be as collective as it is individual, as societies are made up of individuals that need to internalize problems and the need to solve them. Mr. Butler, the thoroughly inspiring high-school teacher, exemplifies efforts like that by an individual to change things definitively and his unifying, understanding ways of speaking touch the boys (and girls) profoundly. We are not short of sufficiently inspiring individuals here in Lagos either. One spark that comes to mind is Tunde Onakoya and his heartwarming ‘Chess in Slums’ initiative that’s committed to helping kids living in Lagos’ most vulnerable place find new lives with chess and STEM learning.

– that the world may know that greatness can be found in the most unlikely places.

However, whilst individuals are undoubtedly the building blocks of any society and so are important, there needs to be a superseding collective consciousness imposed either by a tragedy so collective or an authority so feared or beloved by the collective. In the best cases, both conditions need to be met. In the world of Menace II Society and today’s Lagos, the first condition has been met. Drug use and abuse are rife, violence and murder are rampant and opportunities are being suckled dry by an increasingly small minority. These are tragedies of considerable proportion. As to the other conditions, the problems are multifaceted: in Watts, the state barely works. Same as in Lagos, and they don’t even wish to work for the downtrodden and disenfranchised.

As such, we can only hope for the best, but realize like the directors of this tragic piece must have that it is going to be more of the same for a long while barring collective will and action to back, reward and coordinate the efforts of individuals to forestall a sliding into the kind of anarchy we glimpse in Watts – stateless, youth-less and void of any future.