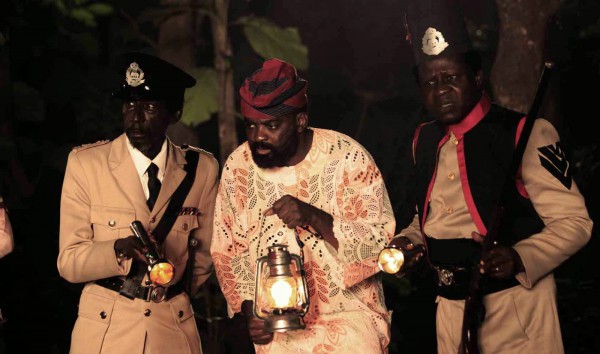 Kunle Afolayan is unarguably amongst the best directors Nollywood has produced. From the gaunt young man, Aresejabata, in Saworoide, to the auteur profile he has now carefully built for himself over the years, Kunle Afolayan has a long list of films in-between. His latest film, Swallow, an adaptation of Seffi Atta’s novel of the same title, will be released on the first of October. This isn’t the first time Kunle has aligned film with country. Saworoide, directed by Tunde Kelani, is a critique of Nigeria, and Kunle Afolayan’s 2014 film, October 1, follows the same national preoccupation, also released on October first, and now, Swallow has taken that path too.

Citation Review: Kunle Afolayan Gambles with a Blend of Experience and Newcomers

But Kunle isn’t all about patriotism, even though it constantly appears in his works. He is interested in drama-invested narratives and portraits of man when thrust into difficult situations. On the side, he has also made other ‘uncharacteristic’ films like Phone Swap. The constant has been Kunle Afolayan’s dedication to presenting craft as excellently as possible. But there has to be some ranking for those works, excellently as some of them are. Which is ‘best’ and which sits below the ranking. Here is a list of Afolayan’s best ten films.

Ponmile (11), has been brought as an apprentice to a mechanic’s shop in the suburbs of Lagos. It is an important point in the boy’s life. He must, based on his perception of the surroundings and his experience therein, decide whether he wants to return to school or become an apprentice to graduate later as a mechanic. It is a ‘slice of life’ narrative take on the usual divide of the pragmatism of apprenticeship or the formality of western education. An appreciable watch. Mokalik is among the nine Kunle Afolayan films available on Netflix.

Kunle’s Afolayan’s meshing of cultures (Ìràpadà, The Figurine) and cultural clash (October 1) are highlighted in Omugwo. This is one of the very relatable Kunle Afolayan films. The trouble of mother-in-laws is multiplied when TWO mother-in-laws of different cultural backgrounds meet in the home a young couple who’s just had a newborn baby. Questions are asked, answers are presented, but as is known, how they are answered is the true journey.

At some point, it becomes easy to read Kunle Afolayan’s fascinations as a director. The stories he likes telling. One of the tropes he favours, is the underdog going against the system (Citation). In The Tribunal, a man is convinced his employment was terminated because he is an albino. He charges them to court in what turns out to be an intriguing lawsuit. The problem with Kunle Afolayan’s films of this nature is that when transposed into real life, the maths don’t hold up; the possibility of events unfolding in such manner border on impossible.

Another favourite trope of Kunle Afolayan’s is the supernatural versus the real. He pitches an improbable premise and argues it out against logic, usually embodying each argument with a character. The Figurine and Ìràpadà both follow this route. Roti does too. A woman (Kate Henshaw) who has suffered numerous miscarriages and the death of a child begins to ‘see things’. She is now convinced her son has returned from the dead. As expected, few believe her.

Netflix’s ‘Castle & Castle’ is a Good Series. Here’s Why

The CEO is one of Kunle’s attempts to condense his thriller genre into a concentrated plot with limited characters in a limited space. Think Escape Room but with more room and with bureaucratic underdogs. Five employees must vie for the position of CEO. As the plot unfolds, darker intents are revealed and what should be a simple affair becomes deadly.

Kunle Afolayan’s long-running old vs new, culture vs modernism and multicultural inclination started with Ìràpadà, his debut film as director. Dewunmi, who lives in Northern Nigeria, is visited by his mother with the worrying news that he must carry out a redemption sacrifice on behalf of the family. Her claim is based on the premonition she has made from nightmares. Dewunmi, an educated man, disregards her claims. It is easy to infer what follows from here. Irapada began what Kunle Afolayan would perfect in The Figurine.

Starring the brilliant Nse Ikpe Etim and Wale Ojo as lead, Phone Swap follows two protagonists from very different walks of life and with contrasting personalities. Both of them switch their phones in an incredible accident at the airport and must now live the lives of each other until the phones are rightfully returned. This is one of Kunle Afolayan’s forays in mild comedy. A warm and sensitive film on love and all the incredulous places it can be found.

Moremi, a brilliant student, has dragged the most brilliant lecturer before the University under the accusation of attempted rape. In a broken education and judicial system, the odds of getting a favourable judgment are insurmountable. But Morèmi is dogged, and even though she loses everyone around her to the fight against this affable, charismatic lecturer, she brings the truth to light.

When the bright director who released Ìràpadà and The Figurine brought October 1 to the Nigerian screens, a career that had somewhat felt as though it had been quietened by his foray into rom-com suddenly brightened back. If any question had been asked about Kunle Afolayan’s authority as a lead Nigerian director, October 1 answered them authoritatively. It is an ambitious film on numerous fronts: narrative scope, questions asked, film qualities, and techniques.

A serial killer on the loose some weeks to Nigeria’s Independence suddenly casts questions about whether the emerging country can rule itself adequately. The onus is on Danladi, an old-timer detective, to capture the killer and stop the killings before independence day. What he finds will question the very notion of independence.

While Irapada reintroduced Kunle Afolayan to the industry as a filmmaker, The Figurine cemented him as a household name. And, deservedly, it makes the top of this list. Starring Ramsey Nouah and Kunle Afolayan himself, The Figurine is about two friends who come across a sculpture with diabolical impressions. It grants them seven years of goodwill and seven years of badluck. The mastery of this film is how slowly it unravels itself. It is safe to say it’s Kunle Afolayan’s most accomplished film.

That list completed, perhaps the question to ask now is where exactly would Swallow sit there? What film would it displace? You can share your thoughts in the comments section or on our social media accounts.