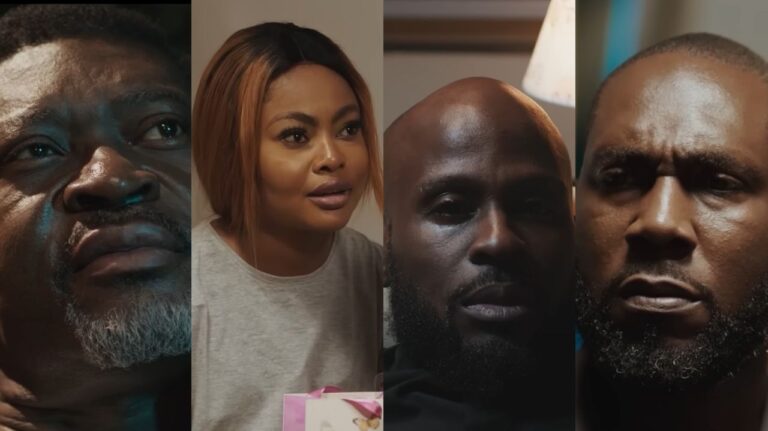 The curtain closes in such an unexpected way.

I was going about my daily activities when the notification popped up. Lo and behold the next episode of Little Black Book which was a few hours away was going to be the season’s finale. What a wawu, who did we offend for this early end to the season.

So we have journeyed through Leo (Ikechukwu Onunaku) and Tade’s (Teniola Aladese) new relationship dynamic, Leo’s dual personality disorder, Jaiye (Paul Utomi) and London’s (Moet Abebe) introduction to the business, Dami (Anee Icha), Cris (Floyd Igbo) and Zainab’s (Helena Nelson) relationship dynamics and lots more. It has indeed been a packed season that held us down from start to finish. However, I’m of the opinion that this finale is a rush and wouldn’t have been bad to see the season have one or two more episodes, just to tie up loose ends. Episode 9 title is “After the Cold Storm”.

Remember Leo going to Idara’s (Bimbo Akintola) place after affirming his readiness to go through the process. Well, the episode begins with Idara helping Leo get on a mental journey into discovering what’s behind the door in his dreams. Down memory lane, Leo realises that his father killed his mother during a struggle and the first scene of the season which was someone burying something in the dark, was in fact Captain (Kanayo O. Kanayo) burying Leo’s mum. Hmmm, I feel this was already predictable from the glimpse we saw but what surprised me is Leo’s reaction yet again to another shocking situation.

It looks like these three are back under the safe roof as it was in season one as Dami gets stripped of everything due to the loss of her job. Well, she quit. But from the demotion they wanted to give her and the awful expression, leaving voluntarily seemed like the best option. To see Dami break down due to the damage done is really heartbreaking, sadly a reflection of our society. But why did this season end without Zainab paying for the damage done.

While Leo and Idara celebrate Leo’s health victory, Idara shares her worries over his calm reaction to the discovery. Captain interrupts their conversation as he comes bearing gifts. He declares the fire investigation off and Leo being the new owner of Meccacity. But Leo is baffled by Captain’s antics and is even more shocked when Captain declares Tade a mistress material and calls Kyenpia (Nengi Adoki) a good wife for the Igwe’s. Leo confronts Captain with the truth of his mother’s death but Captain denies claiming it was his father’s political opponents that kidnapped Leo’s mother and raped her. Could Leo’s dreams be messing with him or is Captain just a terrible liar?

More light is shed on the black book and Tade’s decision on Brian’s (Michael O. Ejoor) job offer. Leo meets up with Tade who is in a haste to resume her first day at Brian’s company. Yes, Tade is leaving, and chaos is loading is all I can say. Tade realises that Leo’s little black book was to help him keep track of the episode of his life when Leoniel pops up. Leo tries to get Tade back as he expresses his feelings for her and clears the air a bit on the situation with Kyenpia.

In the next scene, we see Cris helping Dami move out of her home and they both agree on just being friends as Dami is on the journey to finding a job. Yummy, friends alone indeed. But Dami’s job search is about to come to an end as Brian is set to offer her a job in his company, hurray. Tade makes it clear to Brian that she wouldn’t be mixing business with pleasure and he should stop trying to get her back. Chai, poor Brian.

Things take a different turn as the episode begins to wrap up.  Jaiye visits Captain who has been avoiding him as he declares his willingness to be the son he has always wanted in Leo and explains his troubles with his ex-employer. Captain suggests to Jaiye to do whatever he can to get what he wants as long as he doesn’t hurt his cousin Leo.

Jaiye takes to Captain’s advice and confronts Leo with footage that shows him turning off the alarm that could have saved the burnt hotel. He demands 50% of the company and the removal of Emelda (Bimitan Adegoke) as manager, claiming that this is because Leo took Gladys and everything else from him. Leo confronts him and reminds him of how he forgave him for all that happened at the Abuja Hotel and states that Gladys maintained that she was not with Jaiye. Jaiye doesn’t back down and switches to being a part of the company. I guess this is another unsettling part for me because this means Leo knew all along of Jaiye’s money laundering charade.

In a mid-credit scene, the final curtain closes on this season as Leo gets a call from an unknown person who is at his door. My wild guess is David, Leo’s brother.

I still insist this season ended far too soon. Zainab getting caught and the death case they had in the hotel have not been closed as I feel a dead person’s case doesn’t just get swept under the carpet. Also, what’s with Leo’s cold reaction to shocking news or is he just putting up a calm frontage before he makes a comeback.

Little Black Book season 2 was definitely a fun ride from start to finish. However, in telling the African story (one of TNC Africa’s aims) we see some similarities and some disparities. The similarities like people getting away with terrible crimes and relationship dynamics aren’t debatable because sadly we live in a society where the abnormal is the norm. But it wouldn’t be bad to have the series also portray a bit of what should be and not only what mirrors society. I’m definitely looking forward to the third season as I enjoyed this.

My prediction: it is Leo’s brother at the door and Leo might go away for a while to plot his comeback on both Jaiye and Captain. Dami and Cris won’t last 24 hours being just friends and Brian isn’t going to stop chasing Tade. See you next season!

This marks the final episode of Little Black Book season 2.