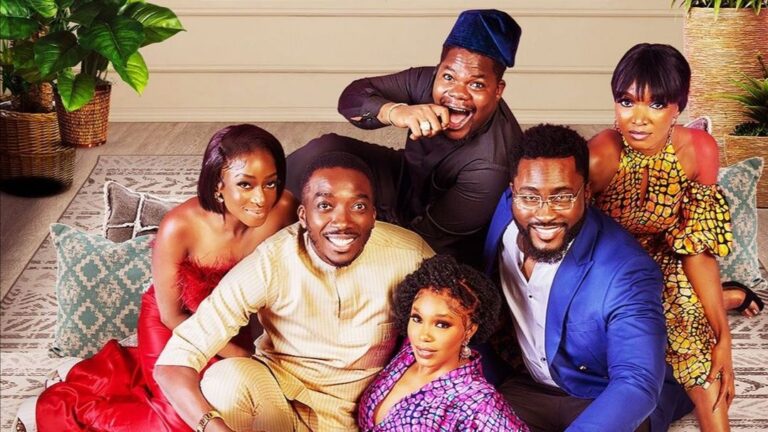 Inkblot’s latest cinema release, The Perfect Arrangement, features a love triangle, politics, high-class living, a fake wedding, a sex tape and two families’ struggle for survival. Seeing her family’s fortunes go down the drain, Tade (Sharon Ooja) decides to take it upon herself to save the day by proposing marriage to her ex-boyfriend, Chidi (Bovi), a union that would guarantee her family’s survival and save Chidi’s political ambitions. But there are some snags: a persistent journalist on a mission, her feelings for two brothers and her personal ambitions.

The Perfect Arrangement shows no evidence of artistic direction, plot details are barely paid attention to and the actors blunder about blindly like their performances aren’t guided. Seemingly lost in a bid to make the film a comic spectacle, crucial details are ignored that plunge the film into an abyss of meaninglessness, politics is discussed as if it’s child play, is Chidi even old enough to contest for a Gubernatorial office in Nigeria? Everything is shoddily put together, from the fashion shows, club scenes and a  wedding between two socialite families that’s meant to be publicised looking like they couldn’t get enough extras and lacking any form of life and pomp. The Perfect Arrangement feels like jumping from one skit to another.

There are no rules or limitations to imagination but for creativity to be successful, it has to be structured. The story looks like it was pulled out of thin air, with no attention paid to the feasibility of the plot. Unlike the title, the plot is nothing close to perfect, the details are scattered, the conflicts do not add up and their premises are too weak, Tade proposes a marriage and continuously accuses her family of sacrificing her for their survival and we never really understand how the marriage saves both families. The dynamics of the story are never clear at any point in the film, the subplots collide with the main plot instead of fusing, we never understand the motivations of the journalist trying so hard to bring down the Kalejaiye family (is it personal or is she just doing her job?), even the cast seem to be confused throughout at which is more important— family, friendship or personal ambition. The plot continues to make one meaningless twist after the other and at the end of the day, nothing is really resolved.

Something common to all Nollywood movies not tailored to fit Nigerian nuances is how the actors always look like fish out of water, flopping about and choking with air as they spit out lines that do not match their mannerisms as it goes against the reality of their characters. It is hard to tell if this is a miscast, lack of directional guidance or inept acting— none of the actors are in sync as they all deliver lethargic and mechanical performances. The Perfect Arrangement is a dismal showing from every member of the cast, they all fail to embody their characters and make a mockery of their roles with clownish acting in overt attempts to be funny.

The chaos extends into the technical aspects of The Perfect Arrangement, of which the cinematography and editing are the biggest culprits. There is no evidence of attempts at storytelling with the camera as the 180-degree rule is frequently neglected and the editing does nothing to help. If their aim was to induce vertigo in the viewers, then it is mission accomplished. One can not shake off the feeling that The Perfect Arrangement is an unnecessarily over-extended Instagram skit: it is chaotic, the romance is bland devoid of life and the comedy is non-existent.

The Perfect Arrangement is in cinemas and will be available on Amazon Prime Video later this year.