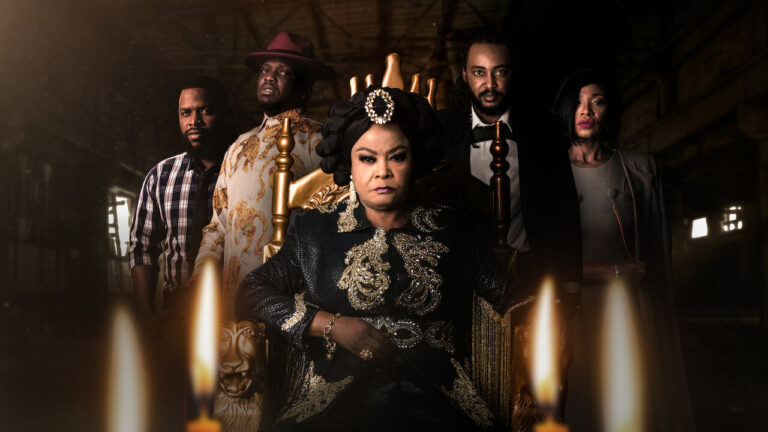 We must all agree that Kemi Adetiba has had an interesting journey. From directing music videos, to The Wedding Party, then the acclaimed King of Boys and now a Netflix original for a King of Boys series. When one looks closely at the film projects, there are elements of directorial unifications. Sola Sobowale has been a recurring partnership, with her comes the vociferousness she perfected for her stock characters as a Yoruba actress; that need to marry culture with modernism, and to sell the mundane as extraordinary, seems important to Kemi Adetiba. For all the affluence in The Wedding Party, it is still a glorified ‘owambe’. And King of Boys itself is a Lagos thug to the world, homage to Hollywood mob films. There are unifying flaws, too. The constancy of plot holes must take front seat; followed doggedly by the anchor of questionable characters.

And while Kemi Adetiba knows her onions to some length, these strengths and flaws of the mercurial director are more glaring in the series. Perhaps, one independent, less glamorous, more ‘experimental’ film between the King of Boys and the King of Boys series might have helped her shed some more flaws in her filmmaking. In this sequel, Alhaja Salami, disgraced kingpin and king of boys, has returned to the country after a governmental pardon. Upon returning, she promptly declares her political ambition to become the Lagos State governor, but old and new enemies, personal demons, and a new player from the press will stand in her way. There are seven episodes in this Netflix original series. Humour me. Let us write a seven-paragraph review, one for each episode, and with faster pacing than the series.

We open with the acting. While there are outliers, King of Boys presents a panoply of mediocre performances. Sola Sobowale carries little blame because she comes from the stock character acting period in Nollywood. When we saw Sola Sobowale in a film, we knew she would be a loud, troublesome, perhaps sinister character, and she excelled in those roles. The problem with that period in Nollywood’s acting history is that actors usually overacted. It’s how Baba Suwe never knew when to quieten and how Ogogo, the macho, ultra-masculine actor couldn’t play a soft character convincingly. While it appears some work went into reining Sola Sobowale’s overacting, it still bursts through, and when it doesn’t, her deliveries are irregularly broken, the pauses in her lines painfully obvious. The Wedding Party played to her strength (the loud mother-in-law), King of Boys followed suit (the grieving mother), and this King of Boys series presents a new conundrum where neither plot nor actor knows exactly what to do with each other.

The plot is protracted. And piled atop, or underneath that, are enough plot holes to sink a warship. The core motivation is weak: Why does she want to be governor? She murdered all her children’s killers without governorship. As the narrative proceeds, it becomes more apparent that the whole affair could have been considerably shorter to make for a tighter, nerve-racking experience. The basic rule of ‘come into the scene late and leave early’ is vagrantly abused. And moments are ballooned with proverbs, chants, and improvised fillers to attain poignancy. Although a generally loud experience, silence would have done it a lot of contrasting good but when that silence arrives, it is usually unwelcome because characters have spent so much time talking. And even in scenes where Sola Sobowale gets the acting right, the pacing fails her. (Proverbs. Proverbs. Proverbs.) Take Makanaki’s (Remilekun Safaru) return scene for example, when he murders Malay’s (iLLBLISS) henchmen. An impressive scene that could have been more thrilling, more suspenseful, if it had only been faster. Makanaki’s return, however disbelieving or slow, is well-handled. This is in spite of the pacing.

Kemi Adetiba’s lighting choices are notable. The serene scenes that feature affluence, comfort and stability have warm, nearly uniformed colours and the streets and scenes of chaos are garish, almost gratuitously coloured—a bad hangover from her music directing days. Brings to mind the popular Nollywood director who’s advised that filmmakers crank up their colouring, “we are a people of colour”. While Kemi Adetiba has a more restrained approach, there are still scenes of chaos that might have done better with less red-green-blue, and scenes of affluence where a little lighting chaos would have done more good. Even better, without the lighting source so apparent as with Makanaki’s reintroduction scene.

We will make seven paragraphs and more if we wish to keep at it, but by then both reader and writer would be exhausted to a fault. A little restraint and controlled opacity make every work feel better, less overwhelming, and that, in summary, is a lot of what King of Boys lacked. It felt like a sojourn into mafia infinity chess, but on beginner’s level, and all rounded off in a rather convenient deus ex machina finale. Yet, this is a win for Nollywood and Kemi Adetiba. In retrospect, she has done well for her career, but her craft, particularly the storytelling, needs more clamp. There are signs of a standout talent; the constant framing of characters into medium shot when they have confrontations is one of her numerous film techniques; and that scene where the reverend father finally concedes to Eniola Salami, for example, has excellent composition: The bible is in the foreground on the lectern, while the man of God is down the altar negotiating terms of surrender with thugs and a politician. Look at how the scene closes; the camera sweeps back and the reverend turns to the altar in defeat, as if looking to the bible for help. Kemi has an eye for the grandiose, a penchant for fanfare, but maybe it is in the mundane that she will strike craft gold.

King of Boys: The Return of the King is currently streaming on Netflix.