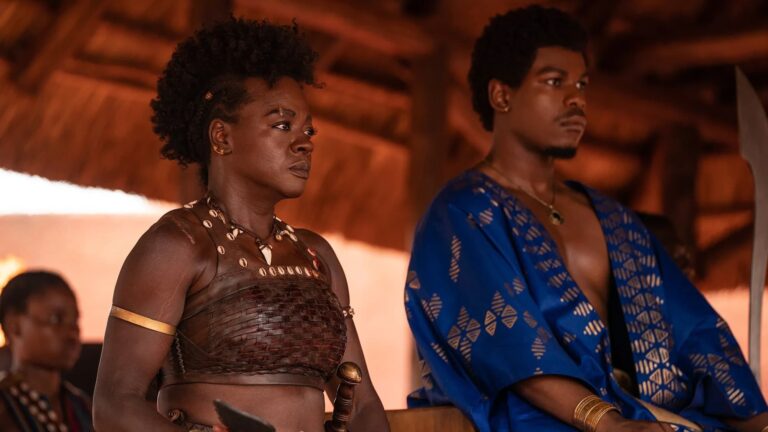 Tẹjú Cole states in his 2018 essay “On the Blackness of the Panther”, “many movies made by Hollywood have engaged in thought experiments about Africa. Some, made for American whites, resurrect colonial fantasy, with the African roles either brutish or naive. Others, made for American blacks, have a goal of uplift, cloaking the African experience with a fictional grandeur.” Somehow The Woman King manages to be a hybrid of both kinds of film. Historical accuracy is put aside for a story that would be more endearing to a western audience. Dahomey is portrayed as a peace-loving kingdom that only participates in the slave trade as a necessity and is looking for ways to get out of (essentially, an old African kingdom that black Americans would have loved to be a part of). The Ọ̀yọ́ empire is portrayed as a bullying empire at the forefront of the slave trade, one of the only historically correct parts of the film. It shows how the kingdom of Dahomey with its army of Dahomey amazons, known as the Agojie, revolt against the Ọ̀yọ́ empire which held tributary status over them. 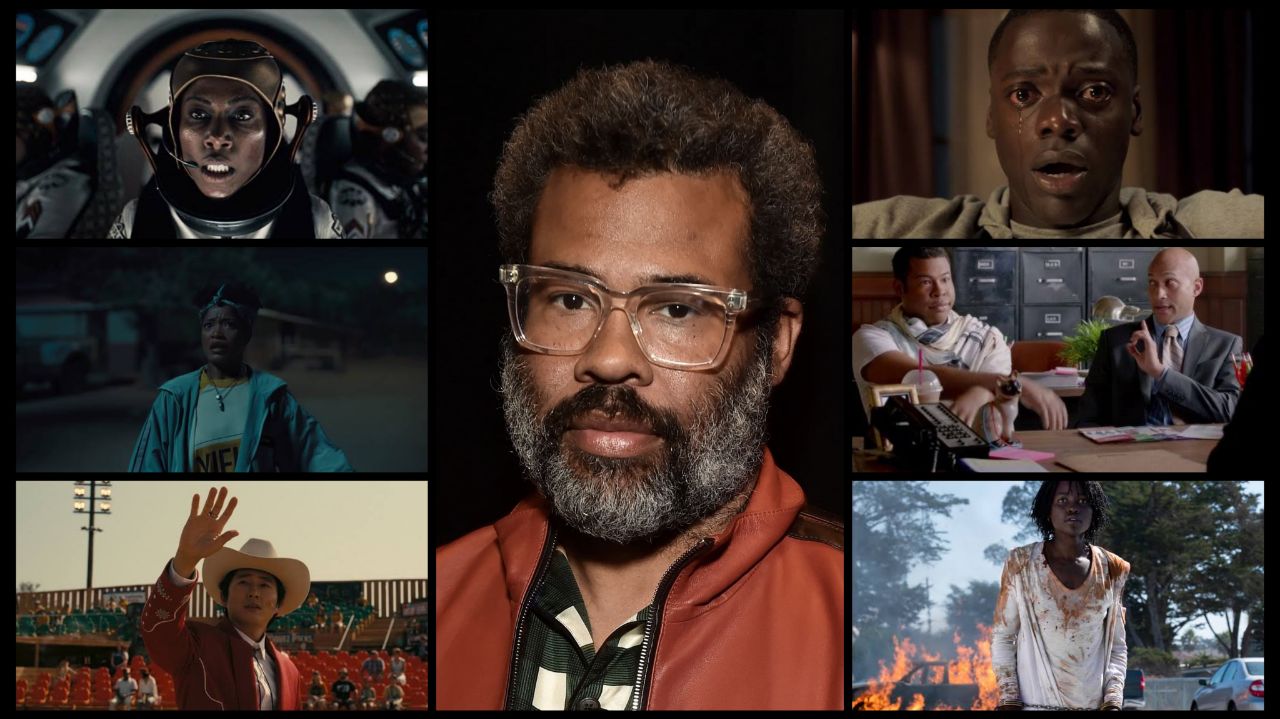 The Films of Jordan Peele

It would have been better and more acceptable if The Woman King had been about fictional African kingdoms like in Black Panther to better suit their intended theme. Retelling a people’s history for your own purpose is a travesty and a blatant disrespect to these people. The film could also have been a result of wilful ignorance because in what world are the people of Ọ̀yọ́, who are Yorùbás dressed like Bédouins, or is it just easier for Arabs to be seen as villains in these modern times (as black people, the filmmakers should know better than to do this).

While we are not here for a history lesson, it is important to state that the Dahomey kingdom was not a benevolent state that saved its people and other tribes from slavery and although they were truly subservient to the Ọ̀yọ́ empire, this was only because they were unable to defeat the better stronger army of the Ọ̀yọ́ for decades until the revolt. Also, Ouidah was never under the control of the Ọ̀yọ́ empire, in fact, it was an independent state brutally conquered by the Dahomey to have full control of the slave trade in the area. The kingdom of Dahomey sent the last recorded shipment of slaves to the United States. So it’s funny to see how badly this story is being retold for whatever reason deemed fit when a way better film could have been made about these powerful women without tainting history.

The Woman King is able to successfully portray the Agojie, an all-female army as a symbol of feminine strength, extolling virtues like bravery, discipline, perseverance, cunning etc. Much effort is put into preparing the actors to be fit for their roles as the cast had to go through martial arts training and the execution of the combat scenes which are beautifully done. The Woman King is also able to depict the Dahomey kingdom as a centralised state, different from other Hollywood depictions of African kingdoms as just tribes. 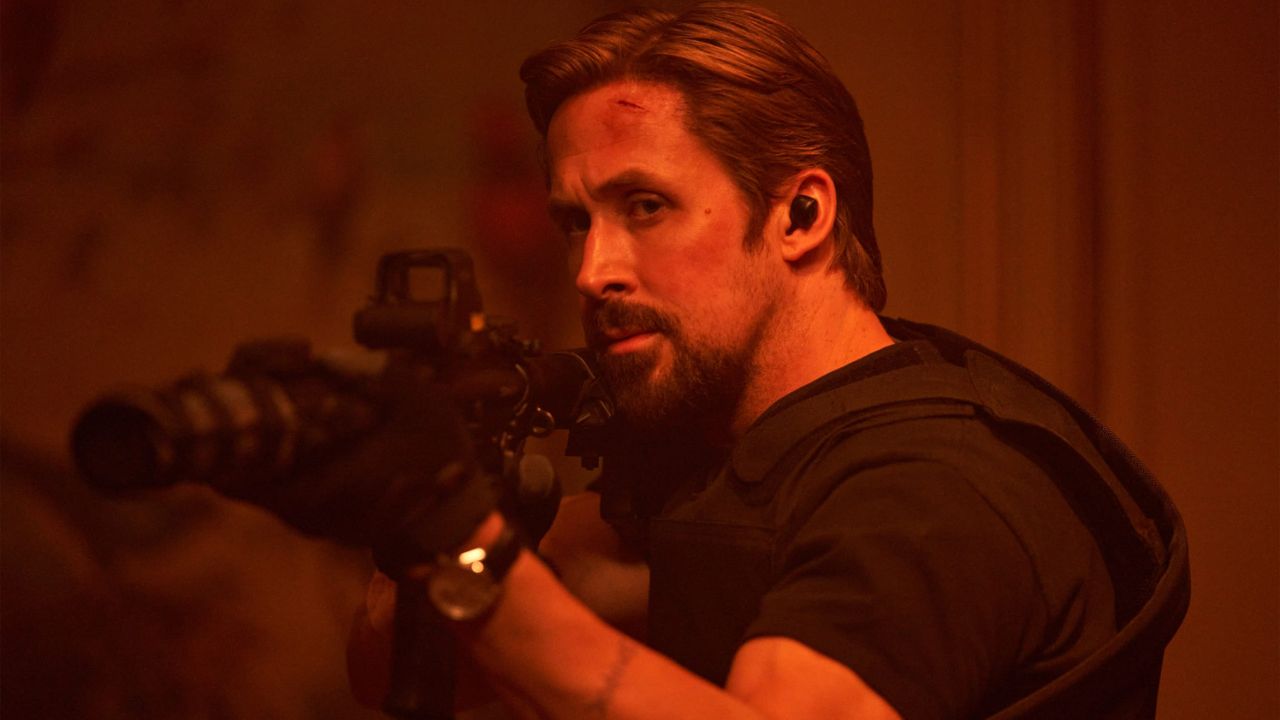 One problem that continues to plague Hollywood movies set in Africa is the speech and dialogue delivery. This problem probably persists because Africa is not seen as a continent of several nations with numerous languages, so instead of narrowing the accent to where the film is set, they attempt to create a Pan-African accent that sounds ridiculous (how do they not see it). In The Woman King, the language and speech are inconsistent as characters who are meant to belong to the same tribe do not even sound the same. More puzzling is why the native language of the kingdom of Dahomey, Fon, is not used. Instead, we are made to unnecessarily suspend our disbelief and endure the ridiculously sounding English used, even though the Fon language still exists today. What is even more ridiculous is how Portuguese characters from Brazil are able to speak the supposed language as fluently as the natives and with the same accent too.

The use of English as the dialogue language greatly waters down the essence of the film, as many parts of it look comic instead of inspiring, especially the war cries. One wonders why pain was not taken to at least depict that accurately. And King Ghezo’s speech towards the end, which is meant to be moving, only elicited laughter from the theatre audience because of how ridiculous he sounds. Another element that The Woman King pays no attention to is cultural accuracy. It is rare to see an African King without a crown, especially in the part of Africa where Dahomey is located and definitely not in public, but Ghezo is not seen with a crown throughout the duration of the film. This could be intentional to reduce the status of the monarchy or the masculine figure in the film. Spiritual war chants are also done in English, taking away the essence which could have been another part of the film that gave it deeper significance.

In The Woman King, the characters consistently refer to themselves as African and the Agojie are even labelled as one of the strongest armies in Africa. Whilst this is probably pleasing to hear, it is highly unlikely that they would have referred to themselves as Africans (Did they even know what Africa was then). Despite it being directed and written by Blacks, The Woman King could not escape from the clutch of the use of a white saviour character trope. Trying to portray the character as mixed race with a Black mother does little to dispel this trope. The use of elements borrowed from other works – Leonidas’ iconic “This is Sparta!” kick in 300 is recreated, and an Oedipus rex-esque subplot is also used; the use of these elements makes the film more enjoyable.

With a cast led by Viola Davis (Fences) playing Nanisca, the commander of the Agojie, The Woman King gives a decent acting performance that is held back by the speech. Lashana Lynch (No Time to Die) and Sheila Atim (Bruised) give energetic and enjoyable performances in their roles as Izogie and Amenza respectively, Nanisca’s lieutenants. Thuso Mbedu’s performance is another acting highlight, playing Nawi, an opinionated teenager who joins the Agojie and goes on to display great bravery.

Directed by Gina Prince-Bythewood (The Old Guard), The Woman King is a decent film that could have been better if it had been historically accurate, emotional scenes were well punched and the unnecessarily long denouement shortened. The historical epic is an example of what will continue to happen if African creatives do not start to tell African stories correctly, a misrepresentation of African history that only caters to western fantasies and sensibilities, an insult to the African audience and their heritage.

The Woman King is showing in cinemas.